Other works by H. Lewis

I received a few emails from Cheryl Thiel, herself an artist and framer, who had just purchased a 22×30 oil painting from an auction house in North Carolina. She seemed so excited about her find, and told me she found a similar painting Autumn on my website page about my cousin Dale’s art, https://hlewisartist.com/2013/04/09/art-from-second-cousin-dale-and-her-mother/.
I asked her to title her piece and she called it the Sunny Side of the Street. Cheryl summed up the differences between the two paintings, …the biggest change was a woman standing behind of the white fence by the gate and a few chickens.  The window of that house was replaced on mine since the woman was not there.  Also noted that what l thought was a curb was actually a tree limb or something in the foreground….a few other little things different..hard to tell on photos.  Also frame similar but a little different.  I couldn’t really see the signature… 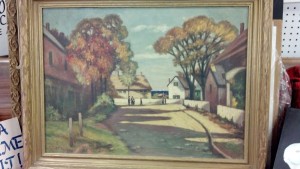 Then Cheryl sent another email:
Hey Kim….l am moving things around  the shop today getting ready for a sale……was taking a piece l have always liked and did not want to sell, home……look at the signature!  Published by Keystone.  I love the frame on it!
She had one of H Lewis’s prints by Keystone Publishing Company, much like one I own. 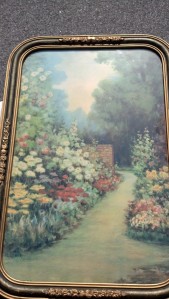 Rob Stevenson wrote to me:
I came across your site while looking for some information on a painting that has been in my family for quite some time. I’m unsure as to whether Hubert Lewis painted this and was hopeful that you might be able to help. 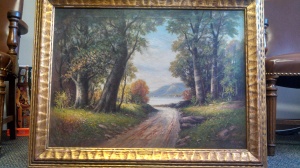 I studied the photograph and wrote back to Rob:

This indeed looks like a painting by Hubert Lewis. The interesting thing about this piece is that under his HR Lewis signature, he wrote the year. I have seen over 100 of his pieces now, and up till now I only knew of only one other that had the year written on it, and it is the “Girl Playing the Piano” that I own.

This landscape is reminiscent of some of the other landscapes, but they are each unique in their own way as well.

A few pieces of my great grandfather's work were always in display at our home growing up. In fact, every relative it seemed had his art hanging. One day I wanted to find out more about him, and it seemed there was no compilation of information in any one place, and there was some confusion about who H Lewis was. So I started digging and it led me to be the one to compile information from several different places, with a lot of the information coming from relatives who had stories handed down to them. I also searched records and collected art. Please fill free to contact me regarding information about Hubert Lewis.
View all posts by Kim →
This entry was posted in The Art, Uncategorized and tagged 19th century art, 19th century artist, American artists, Cheryl Thiel, Diana Wolfe, H Lewis, H. Lewis art, H. Lewis artist, h. lewis signature, H.R. Lewis, HR Lewis, Hubert Lewis, Kim Lawler, Pennsylvania, Robert Stevenson. Bookmark the permalink.

4 Responses to Other works by H. Lewis