Emigrating from the Old Country

On a visit to the industrial town of Govan, Scotland, young Thomas Lewis and his wife Adelaid welcomed their first child, a son, into the world on April 5, 1865. Hubert Robert Lewis was the eldest of seven children. The first two children, both sons, were born in Scotland, and the younger five children were born in Wales.

Govan, Scotland is situated at the confluence of the rivers Clyde and Kelvin. Govan translated from Gaelic means the land of Smith, and may have been named due to its reputation as an area where metal was worked. The proximity to the river, and the deepening of the river allowed a burgeoning Govan to continue to grow with commerce and shipyards. Govan mushroomed during the industrial revolution. In 1864, a year before the birth of Hubert, Govan earned its burgh status in recognition of its importance as a center of commerce and industry.1

Thomas was a Welsh steel worker, who lived, with his wife and children in Wales.  Britain (England and Wales) were big producers of pig iron and steel and approximately 40% of the output in 1875 was exported to the US.2

The US was working to increase production of steel and small steel plants were being built in the United States. The promoters sent scouts out to the old country to sign up experienced help to operate them. Thomas was a trained roller, whose work it was to reduce iron from balls to sheets using a steamer-hammer.      Hubert was said to also work in the steel mills starting at age 12, painting the gauge of the steel onto the rolled steel sheets. Thomas Lewis, and his two oldest children, Hubert and Leonard, were recruited by the Demmler brothers, who were building a finishing mill in Demmler, Pennsylvania. The three Lewis’ left Wales in 1882, boarded a ship from either England or Queensland, Ireland, leaving Adelaid to follow later with the five younger children.

Hubert was just a boy of 17 when he arrived in McKeesport, Pennsylvania to work in the steel mills.  The steel mills and tin-plate mills were undergoing important changes during this time, including the fact that imports that were sold cheaper than US products, and in 1882, the general strike of the Amalgamated Association of Iron and Steel Workers, which represented skilled trades in the mills around Pittsburgh, closed the McKeesport plant.       The resulting shutdown drove U.S. Iron & Tin Plate Co. into insolvency; Demmler foreclosed on the mill, then bought the company’s assets out of sheriff’s sale, and reorganized U.S. Iron & Tin Plate Co. as a limited partnership controlled by his sons and several other investors.

After the mill had gone back into operation a $100,000 fire gutted the entire plant; on the morning of Feb. 18, 1883, sparks generated by the plant’s boiler house set the roof on fire. Insurance covered about half of the damage and once again the Demmlers paid to put the plant back into operation. 3

The Lewis family was able to stay afloat during this tumultuous time, and found work where able. 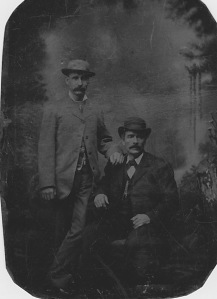 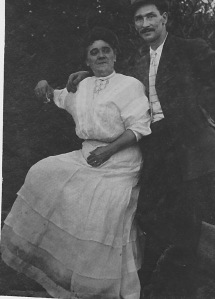 Sarah Benjamin, who was born in Stockton-on-Tees, England on December 8, 1867 arrived in the United States as a baby when her father was recruited by a company named Banfield, that was building a basic operation in Leechburg, Pennsylvania. She was the second of seven children.

Hubert met Sarah, and three years after his arrival to the United States, they eloped and married on February 18, 1885. They did not flee far to elope, just the north side at the Sandusky Street Baptist Church in Allegheny, Pennsylvania. It would seem he was smitten with her for life.

Together they bore five children, the first a girl, Beatrice, in 1886. Then the only boy, John Donald Lewis was born, followed by Garnet. Sarah wanted the next daughter to be named Pauline, but Hubert wanted the more dramatic name of Mercedes, thus she was dubbed Pauline Mercedes, and went by her middle name because she enjoyed the drama of it as well. The youngest child was my grandmother Hazel Huberta born in 1900. My mother related that my grandmother bemoaned her name, saying of all the names in the bible she had to be named after a nut. 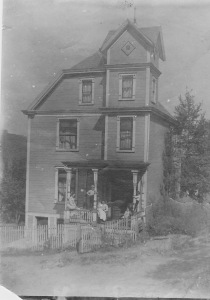 A few pieces of my great grandfather's work were always in display at our home growing up. In fact, every relative it seemed had his art hanging. One day I wanted to find out more about him, and it seemed there was no compilation of information in any one place, and there was some confusion about who H Lewis was. So I started digging and it led me to be the one to compile information from several different places, with a lot of the information coming from relatives who had stories handed down to them. I also searched records and collected art. Please fill free to contact me regarding information about Hubert Lewis.
View all posts by Kim →
This entry was posted in Family, History and tagged 19th century art, 19th century artist, American artists, Apollo, artist, Family, Fine art, H Lewis, h. lewis signature, H.R. Lewis, HR Lewis, Hubert, Hubert Lewis, Hudson River School, Lewis, Painting, pastels, Pennsylvania, Pittsburgh. Bookmark the permalink.

3 Responses to Hubert’s Early Life and Starting a Family